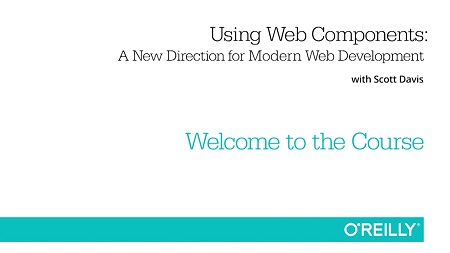 We’ve been talking about “web pages” since we first started talking about the Web. However, with core changes to the web coming fast, it’s time for every JavaScript developer to start thinking smaller. Much smaller. Instead of focusing on pages, web frameworks like Angular are doubling down on the use of Web Components to build reusable page elements.

This video introduces you to the four core aspects of Web Components: Custom Elements, HTML Imports, Templates, and Shadow DOM. Understanding this technology will make it easier for any JS developer working in any framework – not just Angular, but Ember, React and more – to transition to the next generation of those frameworks. With every major browser advancing quickly toward implementation of native support for Web Components, the time to learn is now.

“Introduction to Web Components”, “What’s New with ES6”, and “Angular 2.0: A First Look for Early Adopters” comprise Scott Davis’s learning trilogy about Angular, the Google led framework for mobile and desktop apps. Davis is a frequent O’Reilly contributor and the founder of ThirstyHead.com, a training and consulting company that that specializes in HTML5, mobile development, SmartTV development, NoSQL, Groovy, and Grails.