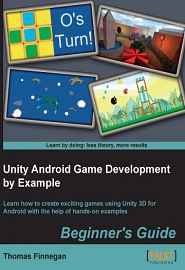 In this book, we explore the ever-expanding world of mobile game development. Using Unity 3D and the Android SDK, we will learn how to create every aspect of a mobile game. Every chapter explores another piece of the development puzzle. Exploring the special features of development with mobile platforms, every game in the book is designed to increase your understanding of these features. We also finish the book with a total of four complete games and all of the tools we need to create many more. The first game that we make is Tic-tac-toe. This game functions just as the classic paper version. Two players take turns filling a grid with their symbols; the first to make a line of three wins. It is the perfect game for us to explore the graphical interface options that we have in Unity. By learning how to add buttons, text, and pictures to the screen here, we have all of the understanding and tools needed to add any interface that we might want to any game. The next game that we create is the Tank Battle game. The player takes control of a tank to drive around a small city and shoot targets and enemies. This game spans three chapters, allowing us to explore many key points of creating games for the Android platform. We start by creating a city and making the player’s tank move around, using controls that we learned about when making the Tic-tac-toe game. We also create and animate the targets that the player will shoot at. In the second part of this game, we add some lighting and special camera effects. By the end of the chapter, the environment looks great. In the third part of the game’s creation, we create some enemies. Using the power of Unity, these enemies chase the player throughout the city, and attack when they are close. The third game to be completed is a simple clone of a popular mobile game. Using the power of Unity’s physics system, we are able to create structures and throw birds at them. Knock down the structures to gain points, and destroy the target pigs to win the level. We also take the time to explore some of the specific features of a 2D game, such as a parallax scrolling background, and how they can be achieved in Unity. We complete the chapter and the game with the creation of a level selection menu.