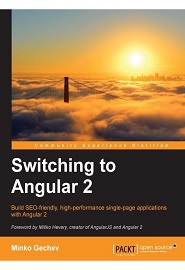 AngularJS is a JavaScript framework that makes building web applications easier. It is used today in large-scale, high-traffic websites that struggle with under-performance, portability issues, as well as SEO unfriendliness, and complexity at scale.
Angular 2 changes that.
It is the modern framework you need to build performant and robust web applications. Switching to Angular 2 is the quickest way to get to grips with Angular 2 and will help you transition in to the brave new world of Angular 2.
We’ll start with an overview which sets the changes of the framework in context with version 1.x. After that, you will be taken on a TypeScript crash-course so we can take advantage of Angular 2 in its native, statically-typed environment. We’ll look at the new change-detection method in detail, how Directives and Components change how you create websites with Angular, the new Angular 2 router, and much more.
By the end of the book, you’ll be ready to start building quick and efficient Angular 2 applications that take advantage of all the new features on offer.
What you will learn