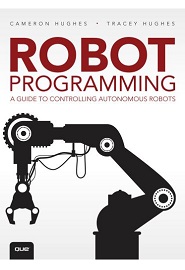 Start programming robots NOW!
Learn hands-on, through easy examples, visuals, and code
This is a unique introduction to programming robots to execute tasks autonomously. Drawing on years of experience in artificial intelligence and robot programming, Cameron and Tracey Hughes introduce the reader to basic concepts of programming robots to execute tasks without the use of remote controls.
Robot Programming: A Guide to Controlling Autonomous Robots takes the reader on an adventure through the eyes of Midamba, a lad who has been stranded on a desert island and must find a way to program robots to help him escape. In this guide, you are presented with practical approaches and techniques to program robot sensors, motors, and translate your ideas into tasks a robot can execute autonomously. These techniques can be used on today’s leading robot microcontrollers (ARM9 and ARM7) and robot platforms (including the wildly popular low-cost Arduino platforms, LEGO® Mindstorms EV3, NXT, and Wowee RS Media Robot) for your hardware/Maker/DIY projects. Along the way the reader will learn how to: