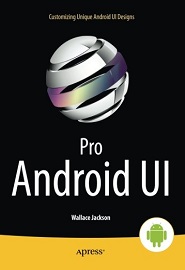 If you’re an Android application developer, chances are you’re using fixed, scrolling, swipe-able, and other cutting-edge custom UI Designs in your Android development projects. These UI Design approaches as well as other Android ViewGroup UI layout containers are the bread and butter of Pro Android User Interface (UI) design and Android User Experience (UX) design and development.
Using a top down approach, Pro Android UI shows you how to design and develop the best user interface for your app, while taking into account the varying device form factors in the increasingly fragmented Android environment. Pro Android UI aims to be the ultimate reference and customization cookbook for your Android UI Design, and as such will be useful to experienced developers as well as beginners.
With Android’s powerful UI layout classes, you can easily create everything from the simplest of lists to fully tricked-out user interfaces. While using these UI classes for boring, standard user interfaces can be quite simple, customizing a unique UI design can often become extremely challenging.
What you’ll learn
How to design and develop a sleek looking and highly functional user interface (UI) design and experience (UX) design using Android APIs
What Android layout containers are, and how to best leverage them
How to design user-friendly UI layouts that conform to Android UI guidelines
What, when, why and how to use fundamental Android UI layout containers (ViewGroup subclasses) and Android UI widgets (View subclasses)
How to use new media assets such as images, video, and animation in a UI
How to create UI Fragments for UI design for specific ActionBar or Activity classes that you wish to create for UI designs within your applications
Scaling UI Design for the various Android smartphone and tablet form factors
Who this book is for
This book is for experienced Android app developers. It can also be for app developers and UI designers working on other platforms like iOS and BlackBerry who might also be interested in Android.