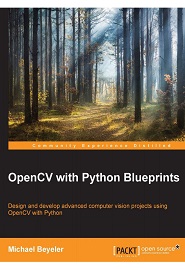 OpenCV is a native cross platform C++ Library for computer vision, machine learning, and image processing. It is increasingly being adopted in Python for development. OpenCV has C++/C, Python, and Java interfaces with support for Windows, Linux, Mac, iOS, and Android. Developers using OpenCV build applications to process visual data; this can include live streaming data from a device like a camera, such as photographs or videos. OpenCV offers extensive libraries with over 500 functions
This book demonstrates how to develop a series of intermediate to advanced projects using OpenCV and Python, rather than teaching the core concepts of OpenCV in theoretical lessons. Instead, the working projects developed in this book teach the reader how to apply their theoretical knowledge to topics such as image manipulation, augmented reality, object tracking, 3D scene reconstruction, statistical learning, and object categorization.
By the end of this book, readers will be OpenCV experts whose newly gained experience allows them to develop their own advanced computer vision applications.
What You Will Learn

This book is for intermediate users of OpenCV who aim to master their skills by developing advanced practical applications. Readers are expected to be familiar with OpenCV’s concepts and Python libraries. Basic knowledge of Python programming is expected and assumed.