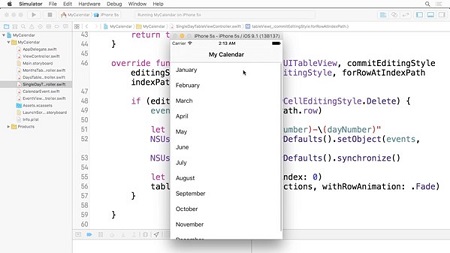 Learn Swift 2. These tutorials take you through the basics of Swift, the fast, interactive codebase for programming iOS, Mac OS X, tvOS, and even Watch OS apps. Swift is ideal for new programmers who want to build their first apps, as well as experienced developers who are migrating from Objective-C.

First, learn how to install Xcode, the IDE designed for Apple developers, and use Swift playgrounds, an innovative coding environment that displays results as you code. Author John Nastos then dives deep into Swift syntax: the variables and constants, data types, arrays, loops, classes, and functions that make your apps run. Next, discover how to build an engaging app interface with storyboards and Interface Builder, connect the interface and code, and use table views to present lists. John shows how to store and retrieve data, and interact with Objective-C, the original app development language that still integrates beautifully with Swift. Using the exercise files provided with the course, you’ll assemble a complete working app with Swift while gaining the skills to go create the next one on your own.