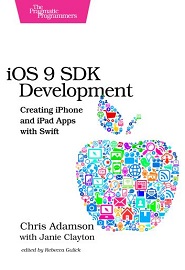 iOS 9 gives developers new tools for creating apps for iPhone and iPad, and our new edition of the classic iOS guide is updated to match. By writing clean, expressive, and maintainable Swift code, you’ll be able to pull in the iOS 9 SDK’s enormous feature set to deliver mobile applications. In this completely revised third edition, you’ll work through an app’s entire lifecycle, from creating the project to publishing on the App Store.
iOS 9 is an exciting release for developers that fully delivers on Apple’s promises. Features long in demand are finally coming to the platform. iOS gurus Chris Adamson and Janie Clayton will get you up to speed on the latest in writing apps for the iPhone, iPad, and iPod touch.
Using the Swift 2.0 programming language, you’ll take hold of the new capabilities of Apple’s powerful new programming language to write cleaner, clearer, and more effective code than was previously possible. Starting with the basics, you’ll see how Swift 2.0 offers more power with less boilerplate code, bringing elegant error-handling and functional programming concepts to your app development.
After thoroughly exercising the language’s features, you’ll dig into the capabilities of the iOS frameworks by building a real-world app, from a simple button to a multi-screen client that cleanly handles multi-tasking, networking, touch gestures, and more. You’ll see how to adapt a user interface from the smallest iPhone to the biggest iPad, and how extensions let an app spread its functionality throughout the system.
What You Need:iOS 9 SDK Development requires a Macintosh running Mac OS X 10.10 (Yosemite) or newer. All work is done in Xcode, a free download from the Mac App Store. Running apps on devices requires an Apple ID.