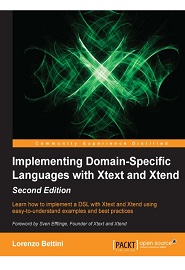 Xtext is an open source Eclipse framework for implementing domain-specific languages together with IDE functionalities. It lets you implement languages really quickly; most of all, it covers all aspects of a complete language infrastructure, including the parser, code generator, interpreter, and more.
This book will enable you to implement Domain Specific Languages (DSL) efficiently, together with their IDE tooling, with Xtext and Xtend. Opening with brief coverage of Xtext features involved in DSL implementation, including integration in an IDE, the book will then introduce you to Xtend as this language will be used in all the examples throughout the book. You will then explore the typical programming development workflow with Xtext when we modify the grammar of the DSL.
Further, the Xtend programming language (a fully-featured Java-like language tightly integrated with Java) will be introduced. We then explain the main concepts of Xtext, such as validation, code generation, and customizations of runtime and UI aspects. You will have learned how to test a DSL implemented in Xtext with JUnit and will progress to advanced concepts such as type checking and scoping. You will then integrate the typical Continuous Integration systems built in to Xtext DSLs and familiarize yourself with Xbase. By the end of the book, you will manually maintain the EMF model for an Xtext DSL and will see how an Xtext DSL can also be used in IntelliJ.
What You Will Learn