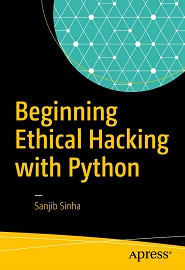 Who This Book Is For
Beginners wanting to learn ethical hacking alongside a modular object oriented programming language.