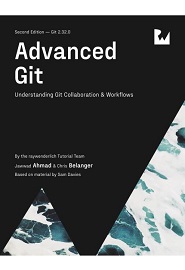 Get Advanced With Git!

If you’re involved with software development, chances are you’ve heard of and used Git at some point. Version control systems are critical for any successful collaborative software project. Git is simple to start using, while accommodating the most complex tasks with version control. However, even seasoned Git users hit roadblocks on how to handle everyday situations.

Advanced Git is here to help! This book begins where the other Git book in our catalog, “Git Apprentice”, ends.

Who This Book Is For

This book is for anyone who wants to leverage version control’s power with Git in their software development process. It starts with a look under Git’s hood, then moves on to more complicated scenarios including merge conflicts, rebasing and more. Finally, you’ll learn common workflows using Git.

One thing you can count on: After reading this book, you’ll be well-prepared to use Git in your software development workflow!